2. The Wabbit and the Ghost Ferry 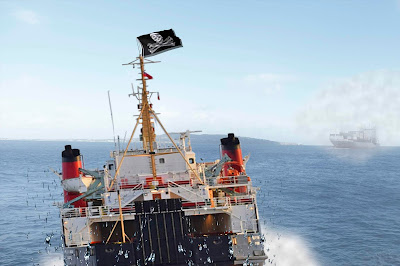 "Thar she blows," said Pirate Jenny. The Wabbit peered into binoculars. He could barely make out the ghostly ship. "One ugly ferry," said the Wabbit. He peered again and nudged Jenny. "These be containers." Jenny strode up and down the bridge, then swayed. "Ghost containers. All accounted for on the bill of lading." The Wabbit murmured to himself. "All ghosts have been loaded." The Lepus plunged and shot up from the waves. The sea washed over the bow and spray spattered the window. "Is the bill of lading clean and straight?" asked the Wabbit. Jenny spoke to the engine room. "Slow ahead. Engage Stealthicator." The Lepus vanished - all except for a skull and crossbones flag that snapped and fluttered in the wind. The ghost ferry was almost transparent and they watched its progress with difficulty. Jenny turned to the Wabbit. "They use a spookchain lading that indemnifies all parties." The Wabbit considered. "Ah, no paper record. So what about the ghosts?" Jenny smiled. "Independent ghost contractors. No connection with carrier or ghost company." The Wabbit watched the ferry. "But who pays the company? Who foots the bill?" "The powers that be," shrugged Jenny. The Wabbit slapped the bulkhead with a paw. "So what's the point?" Jenny grinned her broadest grin yet. "The company is paid for invisible services."
at March 06, 2019