4. The Wabbit and the Container Ghosts 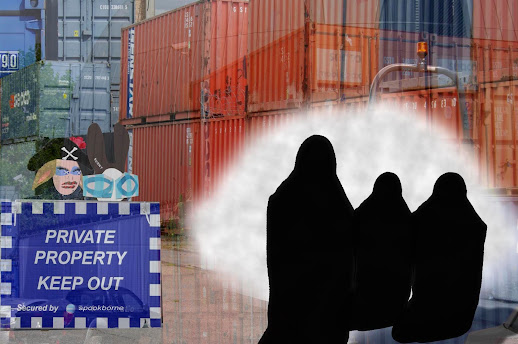 Pirate Jenny and the Wabbit crept onto the quiet dock and between the makeshift container village. The dock wasn't quiet for long. Container doors started to open and figures emerged. At first they were insubstantial but they quickly solidified and moved towards the city. They had little in the way of limbs or features. They appeared simply as cloaked shapes and like their ship, they could move through solid objects. The Wabbit expected them to make some ghost-like sound but they were almost silent. He could hear only the rustling of cloaks and whispering. Jenny tapped the Wabbit lightly on the shoulder. "They are creatures our pirate legends tell of. They live between land and sea, constantly shuttling back and forth." The Wabbit shivered. Jenny continued. "They protect the treasure of criminals who are long dead and whose booty continues to circulate as free trade." The figures suddenly wheeled around as if discovered. Jenny and the Wabbit ducked behind the sign. The Wabbit murmured. "Are they as pleasant as they look?" Jenny stifled a pirate guffaw. "They are the shadow of the stock markets and a million times as vicious." The Wabbit shrugged. "Just the usual then. What are they doing?" Jenny grimaced. "The legend says they visit investors to punish failure and reward success." "What happens to failures?" asked the Wabbit. Jenny shook her head. "They are taken. Then they too must shuttle between land and sea forever." It was the Wabbit's turn to shake his head. "What do they do with the rest of their time?"
at March 11, 2019