9. The Wabbit and the Spoils of War 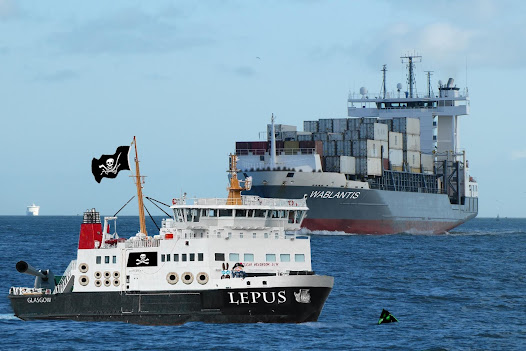 The Wabbit and Jenny stood on the bow of the Lepus and discussed the future of the ghost ship. They had seized it in the night and the unsuccessful souls released by the spectres crowded the deck. With a skeleton crew and a new name, it had orders to sail for Wablantis where its passengers could make new lives. The souls felt substance return to their bodies as they looked across the waves. The Wabbit heard cheering and he smiled a secret smile. Captain Jenny saw it. "You be certain about this, Commander?" The Wabbit shook his head because he didn't really know. The ship was a rust bucket and only vaguely seaworthy - but he thought she'd make it. "They'll have to work together," he shrugged. He looked over the side and into the deep. The spectres were weighed down at the bottom, forty fathom deep and shackled with old iron claws as sharp as razors.  "Last we'll see of them," muttered the Wabbit. Captain Jenny snorted and tilted her pirate hat. "There be more spectres in the City than you can shake a stick at." The Wabbit grinned. "Well they won't be running ghost ferries in the near future." He gazed at the sea. It was super calm, with hardly a ripple. But a shape suddenly surfaced and he shrieked, "No! Another one!" Jenny chuckled. "That be only a trash bag," The Wabbit groaned and hit his head with a paw. "Black sack crossed our path."
at March 22, 2019