7. The Wabbit and the Dead Bell Jazz 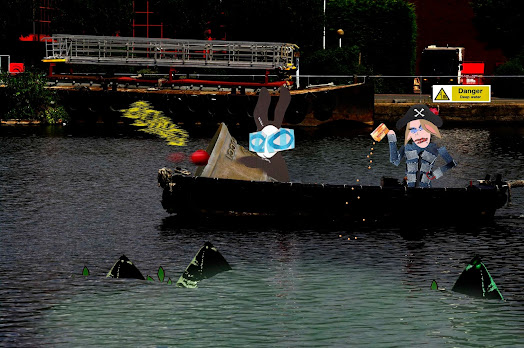 The Wabbit and Jenny commandeered a small craft. The gentle swell made it bob gently in the water and for a while the Wabbit thought nothing was happening. Jenny took out a packet of Sulphur Soap. "Where did you find it?" murmured the Wabbit. "In a shop," shrugged Jenny. They waited. There was nothing, merely the vague sound of an outboard motor. It was all too quiet and the Wabbit said so. "Maybe it's time, Commander," said Jenny, "Ring the bell." The Wabbit had given little thought to ringing the bell and had brought nothing to hit it with. But he tried to think of the loudest drumming he'd ever heard and came up with Max Roach. He whacked the drum with both paws. It boinged across the water. He hit it again in a series of broken rhythms that echoed from every building on the dock. Jenny gazed across the water. "Here they come." The Wabbit's drumming became frantic. Jenny took out sulphur soap and sprinkled it over the side like goldfish food. She waited and listened then  sprinkled some more. A green glow lit the depths. Three heads emerged from the water, nodding as if entranced. They came close but not too close, swaying from side to side. The Wabbit heard hoarse whispering and he continued to hit the bell. But he was getting tired. "What do we do now?"  Jenny started the motor and the craft crept forward. The spectres wheeled and followed. Jenny grinned an unpleasant grin. "Keep playing, we're going to the Lepus."
at March 18, 2019