1. The Wabbit and the No Ferry Company 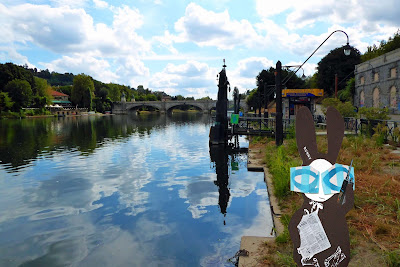 The Wabbit waited in the same place by the river every day for a week. He was quite tenacious, because he knew something was afoot. Despite an advertisement for a new ferry company - complete with timetable - the quay where ferries were due to dock was overgrown and dilapidated. Quayside windows were boarded over and signs hung broken and untidy. The company's advertisement also presented a mystery. It featured in a famous puzzle magazine, and was deeply concealed within conundrums and crosswords over the course of several weeks. Fervent readers dedicated their lives to solving that magazine's puzzles. The Wabbit was one of that stalwart band and knew the magazine generally featured no advertising. So when he first came across the brain teaser, he'd thought it an innovative kind of publicity. With puzzle magazine in paw, he checked it out. He wasn't the only one. Several people approached him. "Are you waiting for the new ferry?" With each enquiry, the Wabbit became more determined to get to the bottom of the mystery. He called Pirate Jenny for information. His walkie talkie crackled with Jenny's pirate voice. "Aharr, I think ye be looking for the Spookborne Packet Company." "That's the One," said the Wabbit. "It be a ghost company," said Jenny. "What do they transport?" asked the Wabbit. "Ghosts," said Jenny.
at March 04, 2019