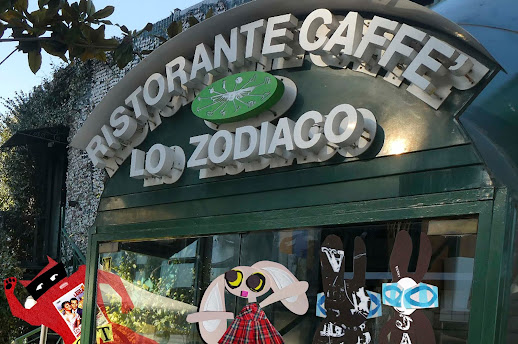 Lapinette had located a new caffè and was urgently ushering the team inside. "Come on now, it's very popular and it gets busy now." The caffè lay at the top of one of Rome's seven hills, just beside the Big Observatory. The Wabbit sneaked a glance inside. It was nearly empty, but lunchtime approached. He nodded. "Where's Skratch?" A figure peered round the edge of the building. "Meaow!" said Skratch. "You're just in time to tell us about the Wabbit's adventure," murmured Wabsworth. "Aha," said Skratch. "Aha what?" said Wabsworth. "I refer to an 'aha' moment," purred Skratch. He turned to the Wabbit. "Wabbit. Have you considered your onieric sequence and come up with anything?" "I did not consider the story a dream," complained the Wabbit. "It was all rather real." Skratch shook his head. "Think deeply of the associations." The Wabbit winked at Wabsworth. "I was in a bar and I associate that with having a drink." Lapinette grinned and cleared her throat. "Wabbit you said everything was blue, which is deep and impenetrable. Can you fathom it?" The Wabbit shrugged and pointed inside the bar and waved. Everyone ignored him. "Truth?" offered Wabsworth. The Wabbit bounced up and down. "There's people coming up the hill, we'd best be quick!" No one paid the slightest attention. "Of course, the blue signifies the feminine," meaowed Skratch. The Wabbit's eyes lit up. He offered Lapinette a paw and bowed. Lapinette took his paw. "That's me," she smiled.
at March 01, 2019