6. The Wabbit at the Exit to the Beach. 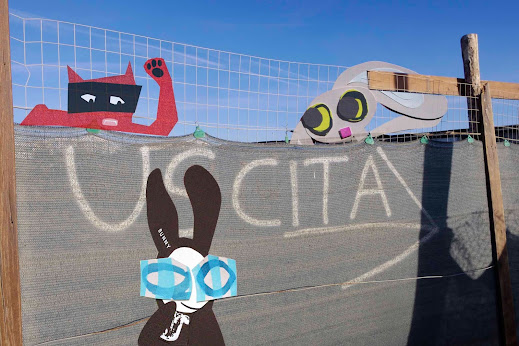 The Wabbit found himself blinking at the exit from the beach. The winter sun beamed down from an azure sky. "Wabbit!" shouted Lapinette, "Where were you?" Skratch meowed from behind the fence. "You were supposed to meet us at the caffè." The Wabbit blinked again. "I was under the beach, you were both there." Lapinette looked at Skratch and Skratch looked back. Skratch and Lapinette shook their heads. "You were!" said the Wabbit. He waved a paw at Skratch. "You were running the Underneath the Beach Bar." "Well, I hope I got paid," shrugged Skratch. He meowed a disbelieving meaow. The Wabbit pointed at Lapinette. "You came down the ceremonial staircase." "Where?" sighed Lapinette. "Under the beach," said the Wabbit, "you danced down and you got an award." His voice trailed off to a whisper. "There was an Escher staircase and that's how we got back here." "I came in the Jeep," said Lapinette. "Perhaps you were in the sun too long," suggested Skratch. "Maybe you lingered longly in the caffè," smiled Lapinette. The Wabbit thought for a minute. "No, no. A crowd of people came on the beach and pointed everywhere and then a piece of driftwood turned to ice." Skratch nodded in agreement. "That would have been the ice men." He winked at Lapinette. Lapinette winked back, but the Wabbit saw it and he shrugged and grinned. "Do they cometh often?"
at February 27, 2019