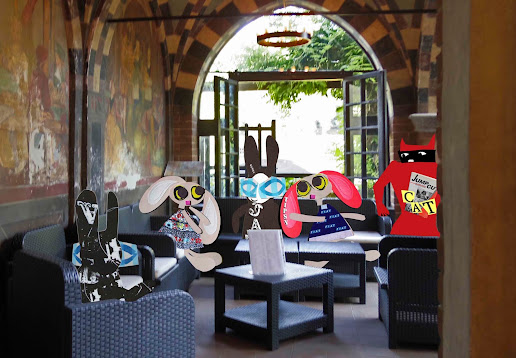 The Adventure Caffè was most pleasant. A gentle breeze blew through the doors and they all relaxed to discuss their most recent adventure. Skratch appeared in in his usual fashion and waited for someone to ask the question. This time it was Tipsy. She was pleased to be at the Adventure Caffè and she wanted to make an impression. "Skratch," she murmured. "What was that for a type of Adventure?" "Well now Tipsy," said Skratch. "That's a whole different question. And a good one." Wabsworth lifted a paw. "A type suggests form and as such, begs the question of content." Tipsy smiled with delight and the Wabbit nudged her. "Museums primarily deal with content," said Tipsy, "... so maybe we could think of it as contentious typology." Lapinette was next. "Yes, but it's not museum locations which constitute a typology but their assembly of contents. That demands specific interrogation as a cultural form." "Mmm. Formal architectural typology," nodded the Wabbit. He tapped a formal paw on a table. "The museum is the architecture of the past. An assembly of artifacts which are to all intents and purposes, dead." Tipsy butted in. "Aren't they then, by definition, the precursor of the new?" Skratch looked at Tipsy with admiration. "What about the visitors? As moving exhibits, do they comprise transvisional content?" "The Wabbit laughed. ""Good name for a band."
at March 21, 2018