4. The Wabbit and the Sudden Assault 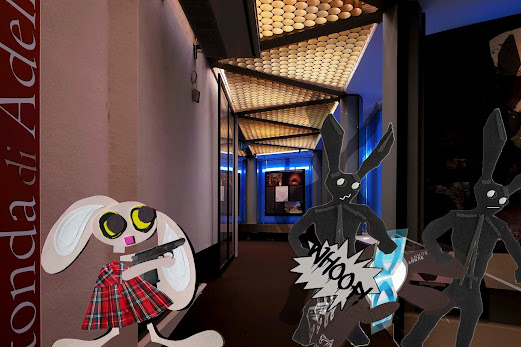 The Wabbit and Lapinette gave Rover the slip in the backstreets and took refuge. The museum was the perfect place and there wasn't a soul there - or so they thought. "We gave him the slip!" grinned the Wabbit. They happily prowled the antiquities. "Too darn quiet," murmured the Wabbit, pointing at this and that. "Did I hear footsteps?" asked Lapinette. "Mice" suggested the Wabbit. This time Lapinette wasn't happy. "Big sounding mice," she said. "With enormous ears?" laughed the Wabbit. They shrugged and prowled on. It happened with sudden speed. The Wabbit glimpsed shadow ears and turned, only to meet the fist of an Agent of Rabit. The Wabbit saw a flash and rather pretty stars. Then things went black and he toppled to the floor. Lapinette wheeled and pulled out an automatic. But the Agents were too fast and they raced along the corridors dragging a dazed Wabbit behind them. Lapinette chased them, firing as she went. But she was afraid to hit the Wabbit and her shots went wide, hitting only shadows. She jumped to avoid bullets as they ricocheted. With her ears against a wall, she paused to think. One thing was sure. Every time the Wabbit said it was quiet, something happened. She dropped another clip into her automatic. "Too loud around here for me." She moved so quickly, she seemed to vanish. Now the corridors echoed to only one sound. The silence of one rabbit running.
at March 07, 2018