7. Lapinette and the Quick Change 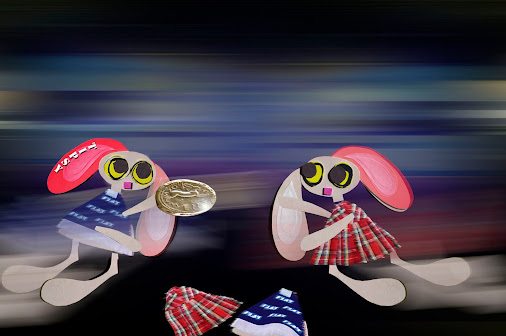 Lapinette took off and ran in search of a coin. She figured any coin would be enough to stall the Agents and she'd seen plenty of coins in museum displays. She flashed down a never ending series of corridors. Artifacts flew past on both sides - but where were the coins? She heard a voice. A figure was running towards her, carrying a large coin that bore a rabbit engraving. "Lapinette!" yelled Tipsy. They slid to a halt. "I'm taking your place." said Tipsy. She shrugged off her frock and threw it on the floor. Lapinette looked puzzled. "Orders," said Tipsy. With lightning speed they changed frocks. "But what about our ears?" sighed Lapinette. "Mine are cosmetic," grinned Tipsy. She unclasped her ear covers and gave them to Lapinette. Now Tipsy was Lapinette. She tucked the coin into her fur. "Where are they?" Lapinette thought for a moment. "Ten corridors down, two left, three right." Tipsy started to run, but Lapinette called her back. "What am I supposed to do now?" "Fitzy and Mitzy will find you." Tipsy sped on and Lapinette sped the other way. But only for a moment. When Tipsy was out of sight, she turned and followed her. She padded the many corridors at a stealthy pace but when she heard voices, she stopped. She checked Tipsy's frock. There was one automatic, an edged weapon and a hand held precision missile. She grinned a lopsided grin like the Wabbit, and breathed. "Everything a girl needs."
at March 14, 2018