8. The Wabbit and the Coveted Coin 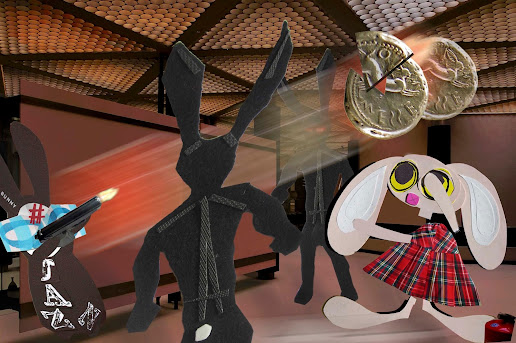 The Agents grinned. The rabbit had come back and she'd brought what they wanted. Tipsy sat down and polished the coin with the hem of her frock. She hummed gently in a beguiling tone that the two Agents found mesmerizing. She rocked the coin in her arms and swayed from side to side until the lead Agent lost his temper. "You've had too much to drink," he sneered. "Oh, I'd love a little dwink," said Tipsy, "Do you have one?" She held the coin aloft. "Look I can pay - with this money." "Give us the coin," yelled the Agent angrily. Tipsy swayed. "Where's my dwink?" The Agent sighed and turned to look at the Wabbit. The Wabbit seemed to be unconscious so he turned back. But the Wabbit had raised himself to a crouch. "The coin," said the Agent. He gestured at Tipsy. "All right," smiled Tipsy. With a sudden twist, she propelled the coin into the air. The Agents grabbed at it in a flurry of paws, but it escaped their grasp. The Wabbit watched it hover. He lurched to his feet and pulled Lapinette's automatic from his fur. In a second that felt like an age, he tilted the gun to the side and fired. The coin sheared and a fragment flew off. The lead Agent howled. "Kill them. Kill them both." The other Agent shouted, "You do it."  He turned and ran from the room. The Wabbit heard gunfire from the corridor, followed by a heavy thud. He rubbed his head and grinned. "I think I'm in charge now."
at March 16, 2018