3. The Wabbit and the Scenic Spin 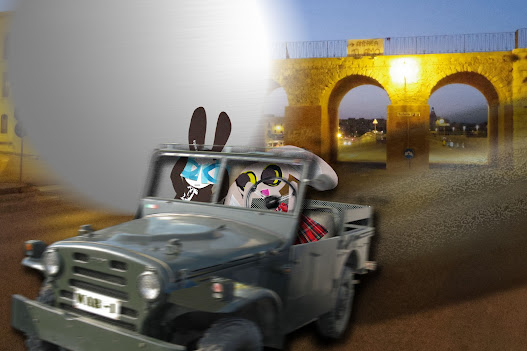 Lapinette and the Wabbit took the jeep for a spin along the coast. It was dusk and the street lights painted buildings a garish yellow. Shadows danced merrily as Lapinette sped along the coast. The Wabbit's teeth chattered a hectic tattoo and his bones shook, so he hung on tight and looked around. It was just too quiet. "It's too quiet," he shouted. "You're never happy," replied Lapinette. There was no one around and any amount of space, so Lapinette pulled sharply on the handbrake and span around in a circle. A cloud of grit flew in the air and stung the Wabbit's face. "Happy now?" grinned Lapinette. "Ecstatic," replied the Wabbit. "Shall we go to the museum then?" suggested Lapinette. She gunned the throttle and tore under the viaduct. "It's closed," said the Wabbit. "I have a key," said Lapinette. The Wabbit knew Lapinette had a key, but he also knew it was a skeleton key that fitted every lock in the known world. His eyes twinkled. "Yes, let's go." He grabbed hold as Lapinette suddenly pulled another handbrake turn and swerved back under the viaduct. "Wrong way?" mumbled the Wabbit. Lapinette gestured with her ears and the Wabbit turned. A giant white ball was hard on their heels - and as it rolled, it whined like a fairground siren. "It can't be Rover," gasped Lapinette. "Lose him!" yelled the Wabbit. Lapinette jumped hard on the throttle and they vanished in a cloud of fumes ..
at March 05, 2018