1. The Wabbit - Spring not Far Behind 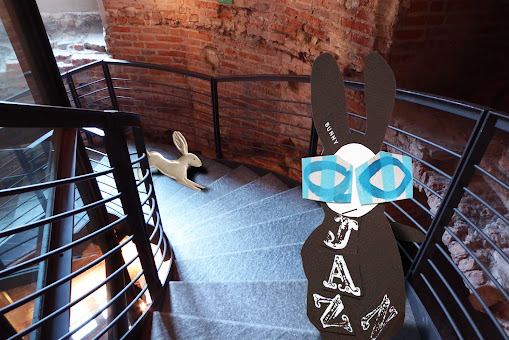 The Wabbit was bored as he usually was between missions. Desperate for something to do, he paid a call to Palazzo Madama to find the real rabbit coin. There was nothing doing. He poked at every brick and paving stone he could see - until he was moved on by a surly attendant. He scowled. "Maybe there is no coin," he murmured: "Maybe it's just a myth." The Wabbit decided to take the stairs to the tower. It was quite a climb but although felt a little puffed after his last adventure, he made headway. The Wabbit decided that he would reach the top, then on the way down he would pick at every brick there was. The coin had to be somewhere. He slogged on, but his ears pricked up when he heard a faint scampering. He turned. There was nothing. He couldn't see anyone or anything. The Wabbit knew that generally in the morning, there weren't many people around. "Mice," shrugged the Wabbit and he resumed his climb. "Spring!" said a voice. "Who said Spring?" said the Wabbit without turning. "Spring isn't far behind," said the voice. The Wabbit turned to look. Nothing. He tapped his paw on the railings and turned back. "I'm Spring!" shouted the voice. With a sigh the Wabbit turned again to see a rabbit scampering up the stairs. It was the colour of shimmering gold and it moved with the grace of an angel. The Wabbit's frown turned into a smile. "What was your name again?"
at March 23, 2018