9. The Wabbit and the Unsteady Exit 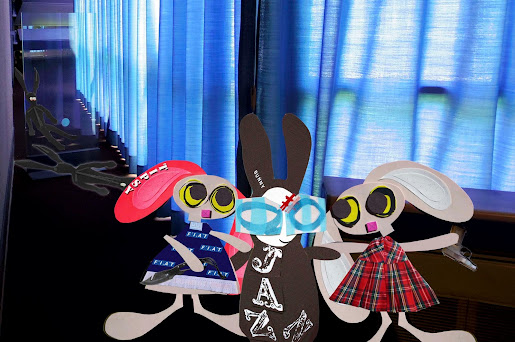 Leaving the Agents prone in the corridor, Tipsy and Lapinette helped the Wabbit from the museum. He was a little wobbly but he grinned broadly and complimented Tipsy and Lapinette on their double act. As they reached the door, the Wabbit looked back. "What about the Coin?" "It's a replica," said Tipsy, "it's all made of ticky tacky." The Wabbit pondered for a moment. "So where's the real coin and what does it do?" "It doesn't do anything you can see," smiled Tipsy," "it just sits around being immensely valuable." "How much is it worth?" asked Lapinette. Tipsy swirled her eyes. "It has no price. It's scarce, rare, unlisted and unpublished." The Wabbit waited for Tipsy tell him where the authentic coin was, but Tipsy was coy. "On the other paw, it is said to have magical powers." "Where - is - it?" growled the Wabbit. Now Tipsy really grinned. "Under a stone in the floor of the Palazzo Madama in Turin." Lapinette was uncertain she's heard the whole truth. "Let's leave the matter there, along with the coin." The Wabbit nodded so hard it hurt his head. He winced. Lapinette tugged his fur. "So. What would you call that for a sort of honeymoon?" The Wabbit giggled. "I'd call it the best one I'd ever had." They all burst into laughter and they were still laughing when they found their way out.
at March 20, 2018