4. Puma and Terni in the Quiet Zone 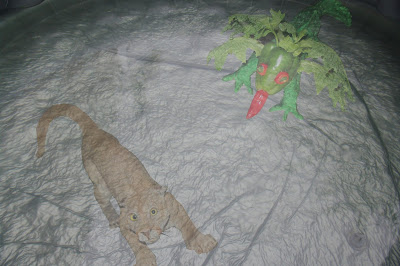 As instructed by the Wabbit, Puma and Terni the Dragon made their way across the Zone. "Why do we always get this job?" moaned Terni. The Zone was threatening although absolutely nothing happened there. Terni wondered if that was the reason. He gave a roar and a puff of dragon breath joined the fog. "I thought I saw a twig move," said Puma. "I think I saw it too," said Terni. Puma let out one of his most menacing shrieks but the Zone silenced it. "This must be the quietest place in the world," said Terni. As they carefully moved on, Puma purred a question. "Do you know anything of this City of Incontinentia?" Terni fluttered his cabbage wings. "I hear it's a dreary place, where everything is bought and sold and nothing is worth anything." Puma prodded an uncertain forest floor but felt nothing. "Well, it can't be worse than here." He swerved and tried to kick up a wind, but nothing moved. He pawed at motionless branches. "I can see a sign," observed Terni. Puma waited patiently for news. "It says, 'Shhh! Silence Please'," bellowed Terni. "I don't like it here!" screeched Puma. "Let's try being very, very quiet," whispered Terni. He fluttered down and became as still as a gargoyle. Puma crouched and froze. Then everything started to change ...
at December 11, 2017