2. The Wabbit and Lapinette's Task 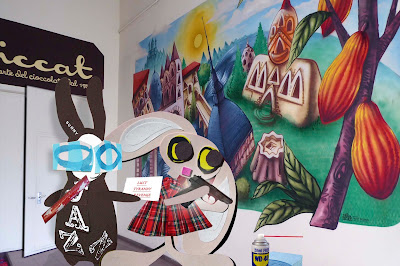 The Wabbit caught up with Lapinette at the back of the Old Chocolate Factory in Pozzo Strada. She was polishing her automatic and barely turned. "You have a card with you?" It was statement rather than a question, so the Wabbit grinned a lop side grin. "It says 'Luck, Tyranny and Revenge'." Lapinette took the card but hardly glanced at it. "Wabbit, it says 'Lust, Tyranny and Revenge'." The Wabbit didn't turn a hair. "Same thing," he smiled. Lapinette continued to polish until her Makarov took on a blue sheen. She rubbed it on her dress and poked a loose safety catch. It swung, then fell off. "Wabbit we need new stuff." she sighed. "I'll place a Christmas requisition," said the Wabbit. Lapinette was in danger of polishing the Makarov into dust. Two clicks rang out as she racked the slide with ease. "Do lust, tyranny and revenge remind you of anything?" she asked. "Westerns," quipped the Wabbit. Lapinette breathed on the automatic, polished some more, then sprayed it all over with WD 40. "No," she said, "we must be headed for Incontinentia." "Never heard of it," said the Wabbit, shaking his head back and forth. "Near Rome," shrugged Lapinette. "Does it have shops?" asked the Wabbit. "Everywhere has shops," replied Lapinette. "Then I'll make a list," said the Wabbit.
at December 06, 2017