1. The Wabbit and the Christmas Paper 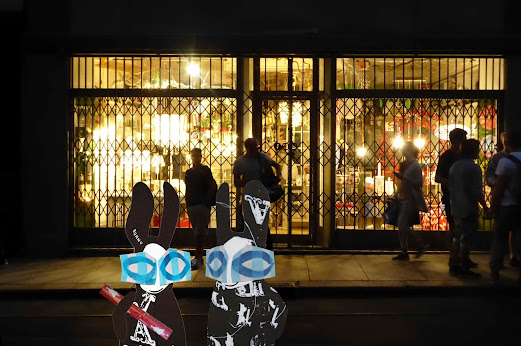 The shops were set to close but it didn't deter window shoppers and they flocked around like geese on vacation. It was there, just off Via Gramsci where Wabsworth caught sight of the Wabbit. He was carrying something festive. "Christmas shopping?" inquired Wabsworth. The Wabbit smiled and patted the brightly coloured roll of Christmas paper. "I just picked up our Christmas orders." "Oh," said Wabsworth, "anything interesting?" "I haven't looked yet," said the Wabbit. Wabsworth was the Wabbit's android double - but some time had passed since he was made. Now his personality diverged considerably from the Wabbit. So he gave the Wabbit a nudge. "Let's look now." The Wabbit held the roll to one eye and looked inside. He shrugged. "There doesn't seem to be anything in here." He shook it hard, but nothing fell out. "Maybe it's written on the wrapping paper?" suggested Wabsworth. The Wabbit looked around, but all the shoppers stared into the windows, pointing and commenting. "OK," he said, I'll unroll it." Carefully he prised away some sticky tape and unrolled the paper. They both had a quick look. "There is something written on a card," cried the Wabbit, "but this light is terrible, can you read it?" Wabsworth studied it carefully. Just then, the tiny card came unstuck and fell to the ground. Wabsworth picked it up. "It says, 'Luck, Tyranny and Revenge'." "Cheerful!" grinned the Wabbit.
at December 04, 2017