11. Jenny and the Lurking Agents 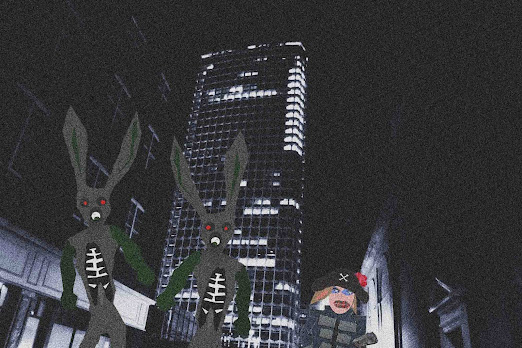 Jenny followed the Agents through the fog. All the way from the docks, they'd chirruped and chattered, so it wasn't so hard to keep pace. Their voices were muffled but Jenny kept close and she could hear everything and more. "We'll get the Wabbit, Skinny," said one. Jenny knew his name was Musty - at least that was what Skinny called him. "Then we'll sell him for gold," said Musty. "To the highest gold digger," giggled Skinny. "Or else we'll dig his grave," laughed Musty. The fog swirled with menace, Lights flickered. There were cries in the dark. "Who's that?" said Skinny suddenly. He glanced over his shoulder. Jenny shrank into the shadows. The slide of an automatic whispered through the fog and Jenny whispered with it. "I must have euro, you know why." "Why?" asked Skinny. "Why, to feed my heart of gold," breathed Jenny. Her sultry voice hung in the damp air. Skinny's eyes lit up with lust and he beat his chest. "Underneath our fur we got, euro and we got a lot!" Jenny stepped from the shadows. "Don't sell cheap, my mother said. Sell expensive, kill 'em dead." The Agents stared into the muzzle of a heavy automatic. "Have you any last requests?" said Jenny. Even though he was far, far away on the other side of the city, the Wabbit heard two shots. "Jenny," he murmured.
at December 28, 2017