6. The Wabbit and the Listless City 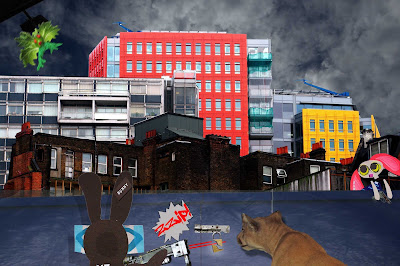 The Wabbit looked at the fence and the city behind it. "Is that it?" asked Puma. "Is it Incontinentia?"  "We'll soon find out," said the Wabbit. He blasted the padlock and it fell apart. "Yep," grunted the Wabbit. Terni the Dragon wheeled high in the air and the Wabbit signalled for a report. "It's arid, with a strong sense of ennui," roared Terni. His roar shook plastic panels like shirts in a breeze. The Wabbit waited until the shaking stopped. Then he kicked the gate. Hinges disintegrated in a shower of rust and the gate swung open. Terni swooped back above the city. "Nothing's moving Commander. Nothing except us." Clouds of mist hung behind the city blocks. But suddenly they began to swirl and the city whirred like a generator. Lights came on. Traffic hummed. "It's a machine," breathed Puma. The Wabbit pressed a button. His Snazer gun whined as it recharged. "Just a machine," he whispered. The city settled into a listless, mesmerising hum. But a sudden voice startled Puma and he hissed, "What took you so long?" Tipsy leaned across the fence, dangling an automatic and pouting. "The shops are opening." she lisped. The Wabbit grinned. "Then we'll need money" Tipsy tossed her automatic from paw to paw. "We'll get some; it's that sort of city ..."
at December 15, 2017