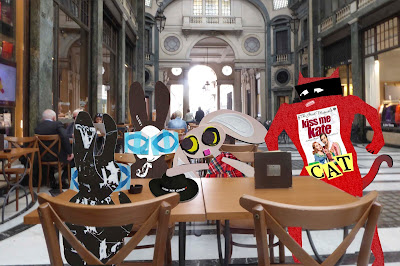 The arcade just off Piazza San Carlo was quiet. People drifted past. No-one paid the slightest attention as Skratch descended on the caffè table wearing his new t-shirt. As always, he greeted everyone with the question, "What was that for a sort of adventure?" Wabsworth was the first to respond. "I thought it was a rather jolly rom-com." Skratch's tail shot up straight in the air and quivered for a while. "I agree," he said, "and although the movement of the image tends to narrative resolution, the question of desire was continually foregrounded." "Desire for what?" asked Lapinette. "Desire for a kiss," said the Wabbit. He puckered his lips. Skratch smiled smugly. "We're talking about the kiss and symbolic desire, a jouissance that tests the limits of social reality." "That's Lacan," said Lapinette. Suddenly she slid a hat across the table. "I found it in the market." "A hat such as that is iconographic," meaowed Skratch. Wabsworth peered at the hat. "What does it say round the brim?" "Kiss me quick," said Lapinette, "OK," said the Wabbit brightly and puckered his lips again. Lapinette effected a pained expression. "But I'm not wearing the hat." "Let me put it on for you," grinned the Wabbit.
[jouissance; Fr. enjoyment. In Lacan's psychoanalysis, it is paradoxical enjoyment transgressing pleasure.]
at December 01, 2017