12. Skratch, Puma and the Inept Agent 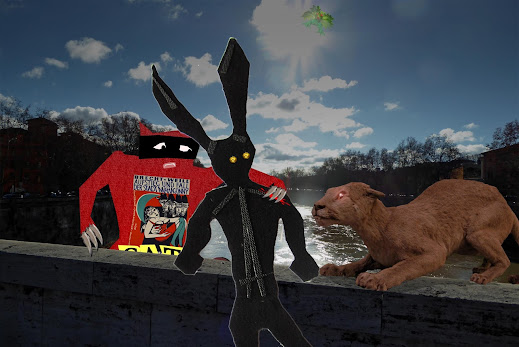 A watery sun rose over the murky river. Reflections looked like second hand soapsuds as the river moved sluggishly through the City of Incontinentia. The Agent was on his own. He had a bit to go and he was late. A wind sprung up and his fur prickled. He leaned against the parapet, puffing and panting and listening to the water slap against the bridge. He thought about the money he would make. He knew if he found the Wabbit, he would be rich beyond belief. "Penny for your thoughts," growled a voice. The Agent started back, but a feline claw sank into his shoulder. "Going anywhere my fine friend?" Skratch purred menacingly and drew the Agent back over the parapet. The wind became stronger and the Agent grabbed at the wall. Puma growled then screeched. There was nowhere for the Agent to go. "Do you like dangling?" asked Skratch and he sunk his claws deeper. The Agent looked down at the water. The wind picked up speed and whipped the surface into a kind of mousse. He shook his head. "Do you believe in dragons?" said Puma. He looked up and so did the Agent. Terni's roar split the sky as he wheeled from behind a cloud. "I was only going to see a show," coughed the Agent in terror. "Is it a comedy?" purred Skratch. He increased his grip. "We like comedy," growled Puma. He pushed the Agent to the edge of the parapet. The Agent looked away from the swirling water below. Skratch laughed and stood on the Agent's paws. "Comedy's when you fall off the bridge."
at December 30, 2017