5. The Wabbit and the Gates of Sheila 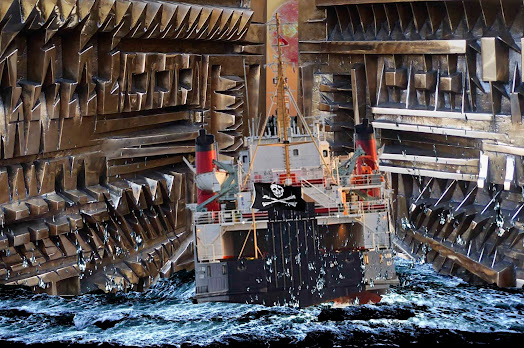 The first obstacle appeared from the blue. One second they were ploughing a steady course, the next they faced a gateway of vast proportions. The gates had more angles than a geometry set, all of them razor sharp and moving like pincers. Jenny shouted for full astern but nothing happened. The Lepus tossed in the foam as the gates moved relentlessly inwards. "Wabbit?" said Captain Jenny. "The Gates of Sheila," breathed the Wabbit. "I only read about them in books." Jenny looked over the side. "How deep are they?" The Wabbit thought for a second. "Deep as the sea," he said nonchalantly. "We'll be crushed," said Jenny. The Wabbit shook his head and signalled the engine room. "Full ahead." The Lepus shot straight at the gates. Bow scraped metal with a jagged rasp. Just as the Lepus threatened to dash itself to bits, the Wabbit took a control module from his fur and moved a lever. The Lepus vanished. Jenny looked down. She seemed to be hovering over threshing water. "I thought you said that didn't change the Lepus." she yelled, "we're still here." The Wabbit moved the lever vertically. Now the gates vanished too. Jenny tasted bronzed metal as they floated on. The Wabbit moved the lever again. The Lepus reappeared. "Don't look back," said the Wabbit. Engines strained as serpent coils of seaweed pulled at the keel. Suddenly the gates crashed shut and the Lepus leapt forward. "We're gatecrashers!" smiled the Wabbit.
at February 01, 2017