15. The Wabbit and the Frackers' Loot 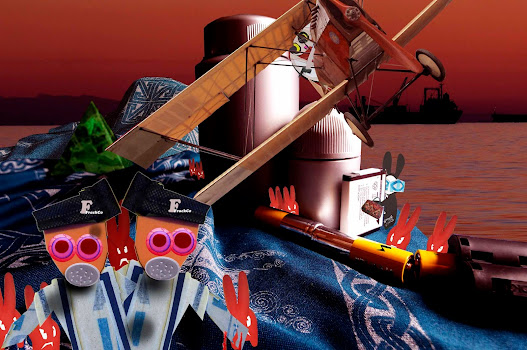 The red rabbits attacked and the frackers ran for cover. Lapinette flew Susan the Biplane shouting orders, while below, the rabbits made short work of cables and pipes.  "I can see the Wabbit," said Susan. Lapinette shook her head. "The Wabbit isn't scheduled for this sortie." "He appears to be watching where the frackers are running to," said Susan. "but I recall he said not to worry about prisoners." Lapinette shook her head again. "I never quite know what he means by that." On the ground, frackers abandoned everything. They even took things from their pockets and scattered them as they scurried for the docks. Rabbit teeth snapped with the power of leg traps. "Just shake them off," cried a foreman fracker, "They're only rabbits." He yelped as a bunny bit him on the hand and cursed as another bit through his boot. A distant roughneck yelled at the top of his voice. "I told you we shouldn't have taken this job." "It was good money," said his mate. "Where is the money?" said another. His voice floated across the fractured earth. The foreman looked back and pointed at a shaking building. "In the office safe. It's OK, I have the key." But there were more and more rabbits and the roughnecks ran faster. The Wabbit ducked inside the building, emerging with a note-stuffed carpet bag. "Gotta pay for this mission somehow."
at February 24, 2017