14. Lapinette and the Red Rabbits 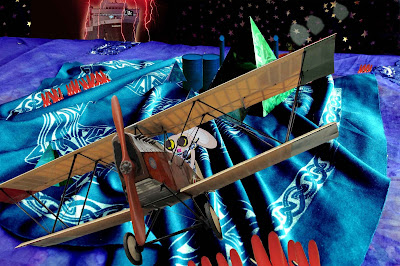 Red rabbits appeared everywhere - they all had walkie talkies and their chatter filled the airwaves. "Fracking station 5 clicks." "Land Unit Five, ready to hop." "Coast Unit Six, ready to hop." "This is Seven. I got six squirters with their hair on fire, running for the boats." Lapinette's voice cut across the chatter. "Break Break." Silence fell. "I have a message from the Wabbit," crackled Lapinette, "I say again. The Wabbit." The Wabbit spoke with a voice he used purely for radio communication. "Red Rabbits, this is dangerous mission. From now it is imperative that you talk only through the barnstormer. Out." Lapinette's radio crackled immediately until every channel was full. Lapinette muted the radio; she knew Susan the Biplane was peeved. "The barnstormer? Is that me?" Lapinette shook her head. "I'm afraid that's me. We're going to surprise them. Hammerhead." Susan's engine growled. "Right away Ma'am." She shot vertically up, then slowed. The engine seemed to die. Susan plunged nose first to the ground. Lapinette braced for impact but Susan spiralled left then cartwheeled across the island and back. Lapinette lifted her radio with an unsteady paw. "Red Rabbits. You are go. Hop, skip and jump."  She pointed to panicked frackers. "Scare them up, Susan." "With pleasure," said Susan, "Hesitation rolls?" Lapinette's stomach rolled like the sea. "I should have skipped breakfast."
at February 22, 2017