8. Wabsworth and the First Sighting 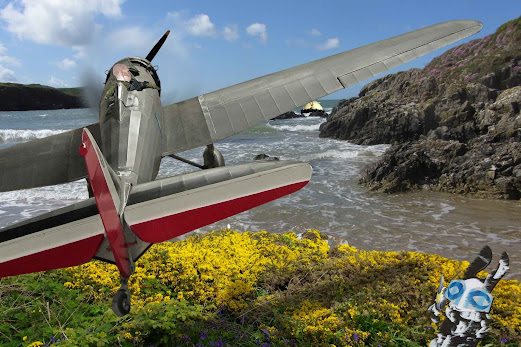 At one time, Wabsworth was an android copy of the Wabbit. Now he had his own stuff and his stuff counted. His calculations were second to none, and commissioning the Alien Pilot for this mission was a calculated risk. His radio crackled. "Thish is Alien Pilot," said a stern voice," "Are you resheiving?" "Clear as crystal," answered Wabsworth, "Can you see anything?" "I shee the fracker's ship," said the Pilot. Wabsworth ducked as the plane cut close across his head and he shouted in his radio. "What's the fracker fracking?" The Alien Pilot's hatred for frackers made him vexed and his voice was a snarl. "He's fracking the earth's crust. Do you want me to shend him a preshent?" The engine's roar drowned Wabsworth's voice. He signalled wildly. "Belay that, Pilot." His circuits whirred momentarily, "Just hail him." The plane circled. Wabsworth listened. "Come in, you fracker or you will be sho shorry." There was no response and Wabsworth could see little movement on the vessel. He lifted his radio and hissed. "Pilot, there's no one on the bridge." Aircraft machine gun fire embroidered the shape of a rabbit across the vessel's superstructure. The plane wheeled and stood on a wingtip. The Pilot looked down at the ship. Now its deck had more movements than a clock shop. Wabsworth signalled to the plane. His radio crackled. Alien Pilot's voice was smug. "Think they got the message?" "They're writing back now," snorted Wabsworth.
at February 08, 2017