7. The Wabbit and the Big Ice Cubes 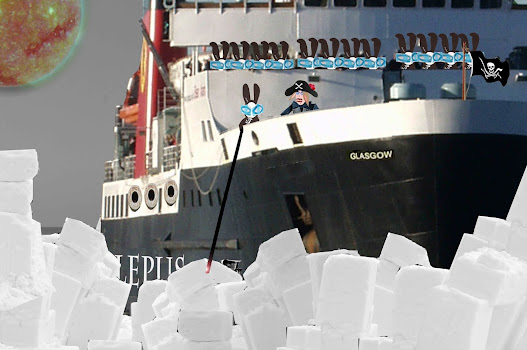 The Wabbit was stuck. Giant blocks of ice gripped the Lepus like a vice. "The weather forecast said not to worry," grumbled the Wabbit. Jenny's radio crackled. "Engines," said Skratch. "She'll no take much more, Skipper." "Copy that," muttered Jenny.  She watched the Wabbit as he rummaged in his fur. The ice groaned like a three day hangover but its grip increased. The Wabbit pulled something from his fur and then pulled again. "That looks like a stick," said Jenny. "It's more of a pole," muttered the Wabbit and he flicked it with the tip of his paw. The pole suddenly extended and jabbed and stuck in an ice floe. Jenny rocked back and forth. "You're going to push the ice away?" The Wabbit shook his head. "It's going to push us." The pole began to get hot and at the sharp end, an oxy acetylene flame cast an uneasy glow across the surface. Ice began to melt on the sides of the floes. They slipped and slithered like an ice cube in a glass of whisky. "Where did you get such a stick?" asked Jenny. "In a chandlers' market," said the Wabbit. The pole grew unbearably hot and the Wabbit moved it from paw to paw, occasionally emitting apologetic yelps. Shards of ice broke away from the floe and slushed against the hull. The floe slipped astern and the Wabbit nodded. "Full ahead," said Jenny into her radio. The Lepus burst forward. "Someone doesn't want us to get to Wablantis," smiled Jenny, "We just got the cold shoulder."
at February 06, 2017