12. The Wabbit and the Aqua Route. 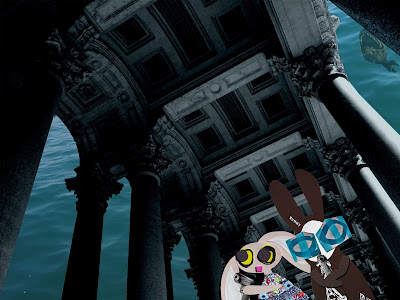 The Wabbit and Lapinette went ahead. "I don't think the dump is compromised." Lapinette's whisper sounded like thunder. "The Wabbit drew an automatic and waved it. "Take no chances." The world of Wablantis was well defended but far from impregnable. Outside, the ocean lapped against whatever it was that held things together. A daemon accompanied them through azure depths. It made a threshing noise like a paddle steamer and every so often it let out a plaintive cry that set the Wabbit's 28 teeth on edge. Lapinette's eyes were everywhere. "How do we get past the sentinel?" The Wabbit lifted his automatic and breathed down the barrel. The gun shrieked and pulsed. A voice answered from the end of the passage. "Who goes there?" The voice was a haunt and the haunt was a voice. The Wabbit nudged Lapinette and Lapinette smiled. "I'm Trixie Beaujolais." "There is yet another," wailed the voice. "Tell me what other goes there?" "It's the Wabbit, for goodness sake," sighed the Wabbit. The passageway groaned. "Your code name?" screeched the voice. The Wabbit groaned and muttered inaudibly. "Salad." "Speak up," wailed the voice. "Salad McSandwich!" shouted the Wabbit. Lapinette shook with laughter. "The sentinel is Ghost Bunny?" The Wabbit scowled. "She said she wanted work."
at February 17, 2017