9. Moloch and the Weird Explanation 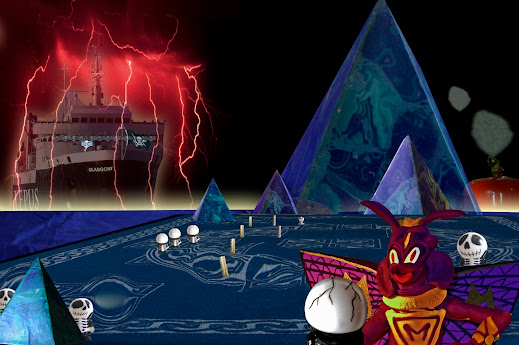 Even with his seven league boots Moloch couldn't get to Wablantis in time. The ground rippled and erupted into a rash of mounds. Noxious fumes from the offshore fracker filled the air. There was no time to lose. Moloch stepped forward and shouted, 'Denizens!'" Small creatures gathered around him. "Have you brought sago?" they yelled. Moloch did his best to smile benevolently. "It's coming," he said quietly, "The Wabbit is bringing it," A cheer went up. "He will save us!" Moloch checked the time and looked out to sea. "It should be about now," he muttered. All was calm except for a small reddish cloud. Suddenly, lightning painted the horizon and a shape loomed. Electricity arced around the bows of a lowering Lepus and there, looking over the side, was the Wabbit. The Denizens cheered and cheered. The Wabbit waved once. The Denizens grew delirious and hoarse from cheering. Moloch called for calm and the Denizens turned courteously. But when they turned back, the Lepus and the lightning - and indeed, the Wabbit - had all disappeared. Moloch chose not to speak of anti-matter to the Denizens. Instead he became inventive. "That was the Wabbit's Cailleach." He thought fast. "A spirit which he sends in advance to cheer his allies." Moloch paused and shrugged. "Mainly, it's to scare the bejasus out of his enemies." From the corner of his eye, he saw the fracking vessel move away.  "It scares me too."
[Cailleach : Mythological Scottish hag spirit, malevolent or benevolent, a protector of animals.]
at February 10, 2017