4. The Wabbit and the Forgotten Zone 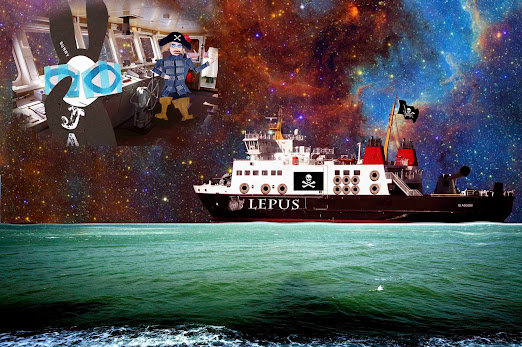 Jenny's voice was soft. "Who are you saluting, Commander?" She could see the Wabbit's reflection and thought he looked a little troubled. "I'm saluting the sea," said the Wabbit. He was thinking of the difficulties of the voyage. He knew there was going to be trouble and had some sense he had forgotten something. But the more he racked his brain, the foggier things became. The Lepus ploughed a steady course north. Her engine throbbed steadily. "Is there any way round the Forgotten Zone?" said the Wabbit. "Not that I can remember," replied Jenny. The Wabbit searched in his fur for the set of lucky charms he'd picked up in a market. Captain Jenny waved her hook. "There's nothing in the Zone that we can't handle." In his mind's eye the Wabbit saw a narrow and unpleasant channel that twisted through a dense jungle of bad tempered dinosaurs. Somewhere between a river and a canal, its torpid water stank of millions of years of rotting vegetables. Slimy banks crawled with the deadly Pirahnaprawn, whose taste in prey was as bad as their breath. The Wabbit sniffed. Jenny thought she's better speak. "I don't like the three headed bats." The Wabbit shuddered. "I never heard of the three headed bats." "Sorry," said Jenny, "I meant to say three headed hats." The Wabbit laughed for quite a long time. "What kind of hats?" "Top hats," said Jenny.
at January 30, 2017