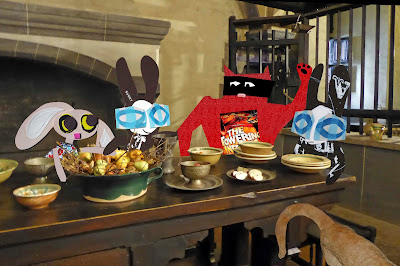 The Adventure Caffè was in the Safe House and it was the cosiest place to be. The medieval castle provided all that they needed, wine, ale and a slap up meal. "Where's Puma going?" asked Lapinette. "He made off with half the food," scowled Wabsworth. Skratch just laughed. "Don't worry I know where he hides it." Lapinette raised an inquiring ear. "In the kitchens under the vegetables," explained Skratch, "it's a cat thing." Lapinette tugged at the Wabbit's paw. "What about the question?" "OK," shrugged the Wabbit, "what was that for a kind of adventure?" Skratch raised his paw high. "It was a multilevel discourse." "Umberto Eco," said Lapinette. "Yes," nodded Skratch, "but your adventure had a specific modality, resting firmly on colour saturation." "Did it?" smiled the Wabbit, winking at Lapinette. "It did," said Skratch. "In turn, the colours connoted environmental concerns." "I need another drink," said Wabsworth. "What colour would you like it?" smiled the Wabbit. "I like my wine crystal clear," said Lapinette. "My ale should be deep straw gold," said Wabsworth. Skratch chuckled. "I like to drink a robust stout. Then I can pretend it's doing me good." There was a sudden shaking. Plates rattled. Golden nectar quivered in the Wabbit's tankard, The castle filled with medieval clanking. Lapinette frowned "What was that?" "Just a little tremor," said Wabsworth. The Wabbit looked at waves of beer lapping the inside of the tankard and murmured. "We were shaken but not stirred."
at September 23, 2016