8. The Wabbit and a Spin of the Wheel 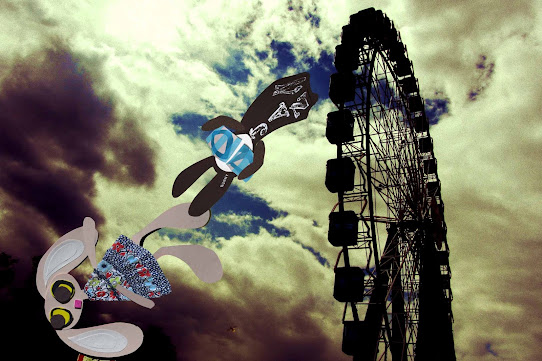 Their leap was overstated and they overshot the Golem by a long way. But they were fortunate. A massive Ferris wheel lay directly in their path and it was spinning at speed. "Sling shot!" yelled the Wabbit. Lapinette reached the Ferris wheel first. She bounced on the top gondola and with a thrust of her feet, launched back to the Fracking site. Only now, she was going twice as fast as before. The wind tore at her fur and the ground loomed sharply ahead. The Wabbit landed awkwardly inside a gondola but it propelled him outwards leaving some of his fur on the metalwork. He looped up and then down at an alarming rate. Now he was directly behind Lapinette and he saw her legs move position - so he did exactly the same. "Ouch," he groaned. Lapinette yelled that he needed more exercise. The Wabbit could hardly hear what she said but he knew anyway. It occurred to him that he was getting quite enough exercise as it was. He watched Lapinette's legs draw into an arabesque position. As she landed, she executed a perfect chassé and stopped as elegantly as an airliner. The Wabbit made a fair attempt to copy her then gave up. He somersaulted along the bumpy road and came to an abrupt halt. Lapinette turned to look at him. "How was it?" she smiled. "Perfect," said the Wabbit.
at September 14, 2016