6. The Wabbit deals with the Dark 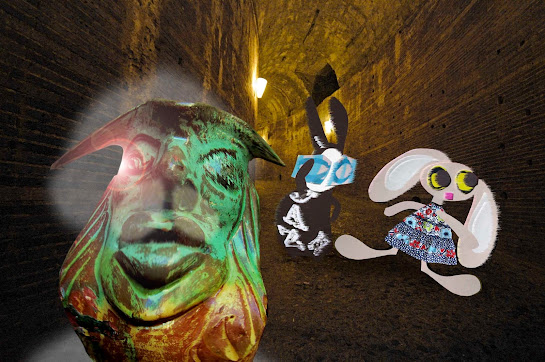 "Why is it always down?" yelled the Wabbit. The passageway was steeper than it looked and they both picked up speed. A prickly wind blew at their backs and ruffled their fur. Lapinette spotted another passageway and dived for it. The Wabbit shouted but his shout was muffled in the whirling fumes that issued from the Golem's nostrils. They made an acrid stench. The Wabbit sniffled and coughed and headed after Lapinette. He could hear Lapinette yelling, "We need our own ground." "This way!" shouted the Golem. "I have a surprise." The Wabbits paws slipped on the damp earthen floor. "I don't need any surprises." Lapinette scooted through a narrow opening where the air seemed clearer. But the Golem continued his path and his voice shrilled in the distance. "There is no escape from the Fracker's Golem." The Wabbit had every intention of escaping. He grabbed for Lapinette's paw and she pulled him through another crevice. Suddenly they were in the dark. They waited for their eyes to get used to the light, but there was no light to get used to. The Wabbit started to whistle. "What are you doing?" asked Lapinette. "Whistling in the dark," said the Wabbit. He put out a foot and scrabbled around. There was absolutely nothing but a wall and a ledge. "I think we're in the abyss," murmured Lapinette. "It needs better lighting," said the Wabbit.
at September 09, 2016