3. The Wabbit and the Doorless Castle 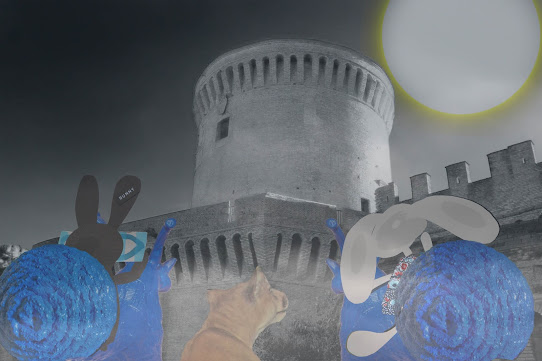 Puma walked for several days. They followed until he came to a clearing where a castle rose from the mist, lit by a bleached sun. "Chemicals," growled Puma. Lapinette wrinkled her nose. "It stinks like a soggy old mop in a corner." "Oh stinky stench," sneered Mo. "Poo bum smell,"  drawled To. The Wabbit waved up at the tower, but no-one responded. "How do we get in?" murmured Lapinette. "There is no door," said Puma. "Then how do people inside get out?" asked Lapinette.  Puma screeched softly. "No-one has ever seen anyone." The Wabbit ran his paw across To's antennae. "Well, I don't like the sound of them." The team rode around the castle but although they looked from every angle, the scene was exactly the same. "There's a sort of a village nearby," snorted Puma. "Who's there?" asked the Wabbit. "Vagabonds, jailbirds, swindlers, mountebanks, organ grinders and lazzaroni," said Puma. "Cool," breathed Mo and To. Lapinette thought for a while. "Does this unpleasant assembly know who's in the castle?" "No they don't," said Puma, "but they hold them in the highest regard." The Wabbit contemplated kicking the walls, then felt in his fur for his emergency supply of CL-20. Lapinette looked stern. "Wabbit, is that entirely wise?" The Wabbit shrugged. "Cut out the middle rabbit?"
[Lazzaroni: 18th Century homeless idlers of Naples who lived by chance work or begging.]
at September 02, 2016