10. The Wabbit at Point Frack 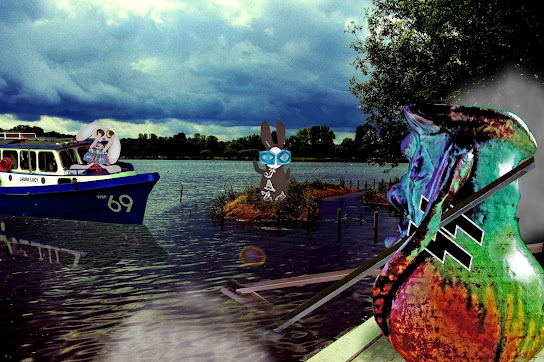 The Golem stuck his fracking tools in the lake. But the Wabbit and Lapinette were pretty quick, even by rabbit standards. The Wabbit swam to a small island and from somewhere, Lapinette acquired a police barge and chugged straight at the Golem. "You rabbits are nothing but trouble!" yelled the Golem. The water clouded with fracking fluid and the stench was considerable. Lapinette grimaced and shouted from the bow. "Where's your chicken licence?" The Golem was bamboozled. "What chickens?" The Wabbit threw his voice and the clucking of 100 chickens swirled from nearby trees. "The chickens said they would help me," groaned the Golem. "The employment of chickens is forbidden under City Ordnance," stated the Wabbit. "They're not my chickens," screamed the Golem. "Ah!" said Lapinette strictly. "Chicken theft is by massive fines punishable." Her barge grew closer. The Wabbit fished in his fur and dropped something in the water. A bolt of electricity surged towards the Golem. Water boiled for an instant. Tools burned red. The Golem yelled in pain, dropped his tools, clutched his sides and froze. The Wabbit smiled grimly because now the Golem was completely inert. But from the depth of the waters rumbled a voice - the voice of the Fracker. "I'll be back to frack!"
at September 19, 2016