9. The Wabbit and the Golem's Folly 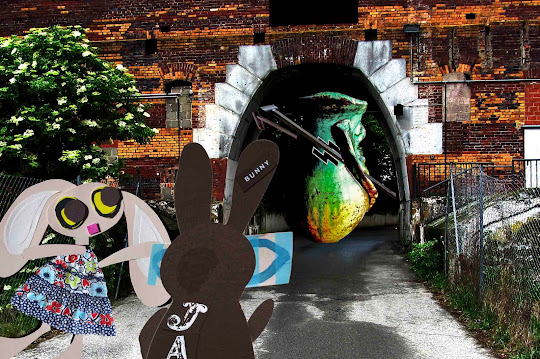 "There he goes!" Lapinette knew her statement was redundant but the Wabbit didn't turn a hair. "He has his fracking tools with him," said the Wabbit, "so he must be going to frack." The Golem rolled along, humming a merry tune - and his tools made a clickedy clackedy sound as he went. Then he sang in a clangy voice that echoed through the spooky tunnel. "I am a little fracker and a fracking I will go. I’ll frack the ground from dawn to dusk, until the land is just a husk. A fracking I will go." Lapinette snorted. "That seems clear enough." Suddenly the ground shook and a fissure opened in the brickwork. Lapinette grabbed onto the Wabbit's fur as tremors died away. "He seems to have started already," said the Wabbit. "What? He started without us?" grinned Lapinette, "that's poor." The Wabbit growled through his 28 teeth. "And we did have a fracking invitation, I recall." "We should accept it then," said Lapinette. "We'd be silly not to," grinned the Wabbit and he hopped forward in pursuit of the Golem. Whistling his tune, the Golem rolled round the corner. The Wabbit and Lapinette crept after him on silent paws. "Knick, knack, frack," sang the Golem. Then he stopped and turned. "I smell creatures." The Wabbit threw his voice and it bounced from the other side of the tunnel. "Only us chickens. Can we dig with you?" "Suits me down to the ground," laughed the Golem as he turned away. Now, all that could be heard in the tunnel was a faint clucking ...
at September 16, 2016