5. The Wabbit and the Smoking Pit 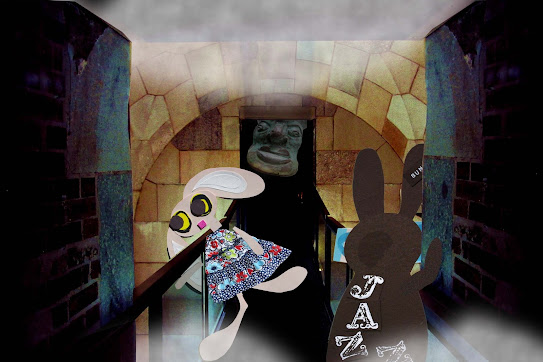 The walkway turned into a bridge and under the bridge there was nothing. Nothing except acrid fumes that swirled round their feet and stung like ant bites. The Wabbit squinted down. "See anything?" "It looks like an abyss," murmured Lapinette. "How deep?" grinned the Wabbit. "An abyss has no depth," replied Lapinette. "I knew you'd say that," said the Wabbit. A screech sounded from the chasm that set the Wabbit's teeth on edge. It was like a thousand fingernails scraping on a glass panel. Whatever made the sound seemed to be working hard. Lapinette's ears stretched. A compressor burst into life, then another. Soon the passage way was an echoing tunnel of sound. "Let's move on," said the Wabbit. It was only then that they noticed a presence. What had only been smoke transformed into a lurid face that they both recognised. "You're not the Golem!" shouted the Wabbit. "You are Frack." The head shook and made a jolly smile. "I am Frack's Golem, fashioned from clay and steel, case-hardened in the Jaws of Hell." Metal scratched on stone. Shrieks echoed from the walls. The Golem's eyes beckoned through the smoke. "Follow me." "No fracking way!" shouted Lapinette. But the bridge started to sway and the handrails plunged into the abyss. The Wabbit and Lapinette hopped quickly forward. "We do expect light refreshments," said the Wabbit.
at September 07, 2016