12. The Wabbit and Time for Business 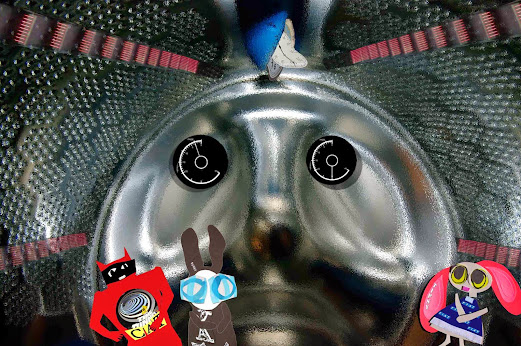 The team escorted the Zoners into the Time Tunnel and it seemed like things were going OK. But events happened fast. The door slammed shut and the walls started to throb. A stentorian voice announced a 27 second warning and a second hand began its sweep. The Wabbit shivered violently in what he thought was a cold wind - but the wind wasn't blowing it was pulling. It drew the Zoners into a large conduit in the roof and the tunnel made a sound rather like a belch. "If you could express a preference," said the voice, "at which Time Zone would you care to destinate?" The Wabbit didn't know if destinate was a word, but this wasn't Scrabble and the word wasn't high scoring. Tipsy clutched her stomach. "I'm queasy." "Pleased to meet you, Queasy," said the Tunnel. "How can I help you destinate?" Skratch was also nauseous and his fur was on edge. But he was a quick thinking feline. "We'd like to be back at the movies watching The Brain that Wouldn't Die." The Tunnel paused at length then spoke. "Tell me of this Brain that Wouldn't Die." "There wasn't much in it," shrugged Skratch. The Wabbit interrupted. "Skratch was prevented from completing his assignment." "Did the Zoners disrupt time?" asked the Tunnel. The Wabbit nodded. "They're not bad fellows," said the Tunnel," and they do bring me business." "Ah, business?" growled the Wabbit. "Didn't you hear that times are thin?"
at April 27, 2015