5. The Wabbit and the Twilight Zone 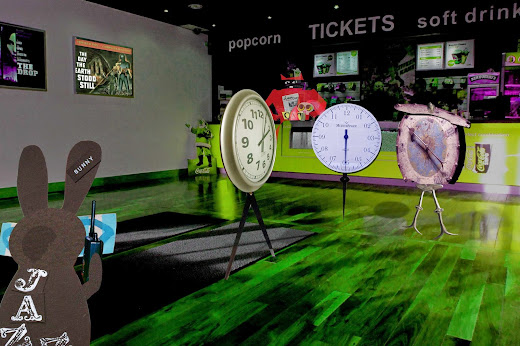 The Wabbit pursued the voices a long way from the forest and into the city. They were heading somewhere specific. "Come in Juliet. This is Zone Zulu, copy?" The radio whined. "Juliet. Go ahead." "The Wabbit had difficulty in describing the scene. "I'm at the cinema." The radio hissed. "Leave that for later Commander." The Wabbit gritted his teeth and tried not to yell. "The Zoners are in the cinema!" A long silence ensued. "What are they doing?" "Chatting," said the Wabbit. "What about?" asked Juliet. The Wabbit made static noises, slipped his radio into his fur and listened. "Are we late?" said the first Zoner. The second Zoner chortled. "No, t'is the cinema that's early." "We have time on our hands," said the third. Then they all laughed just like in the forest. The Wabbit caught sight of a red flash. So he looked towards the bar and saw Skratch with Tipsy's head under one arm. He made a slight gesture, but none was returned. And although Tipsy seemed to have a drink, the Wabbit wasn't sure of her Zone. Both Skratch and Tipsy looked transparent and shimmered in the dim glow. Suddenly, the Zoner on the right swirled his hands three times. "What time zone did we ask for?" "Whisky," said the middle Zoner. They all turned to look at the bar. The third Zoner ticked a little. "This isn't Whisky, it looks like X-Ray." "We can still have fun though," said the middle Zoner and they giggled. The Wabbit watched Tipsy sip her drink. "Let's watch a late movie," suggested the first Zoner. The Wabbit hopped forward and spoke. "How about the Twilight Zone?"
at April 10, 2015