2. Skratch, Tipsy and the B Movie 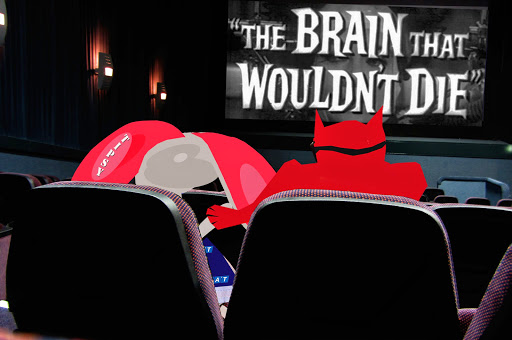 At a repertory cinema near the centre of town, Skratch and Tipsy met to see an old B movie horror. Skratch knew it had become a cult classic but said nothing, owing to the Wabbit's instructions. He was not allowed to broach the subject of movies at all and was therefore at a loss for conversation. Skratch felt a paw creep into his. He'd been expecting the brush of a foot or leg, but a paw he felt he could deal with, Skratch squeezed it. "I'm scared," whispered Tipsy. "Don't worry," said Skratch. "I'm here and nothing can harm you." Tipsy leant forward and eagerly watched the story unfold. Skratch had seen the movie several times and was responsible for submitting a long and technical article to Jump Cut Review, now at the revision stage. "Yikes!" shrieked Tipsy as a decapitated head made conversation from a laboratory worktop. She looked away, only to notice a door at the side of the screen. "What's behind that door?" she murmured. An actor's voice from the screen seemed to reply. "Horrors no normal mind can imagine." Tipsy jumped. "I think it's a broom cupboard," said Skratch soothingly. Tipsy's eyes were riveted on the movie monster as it ripped its tormentor limb from limb. "Will you see me home afterwards," she breathed. "There might be monsters." Skratch smiled and nodded and grasped for the chocolates. Tipsy looked thoughtful. "Anyway, how long can you live without a brain?" "It depends how old you are," said Skratch,
at April 03, 2015