7. The Wabbit and the Wild West Zone 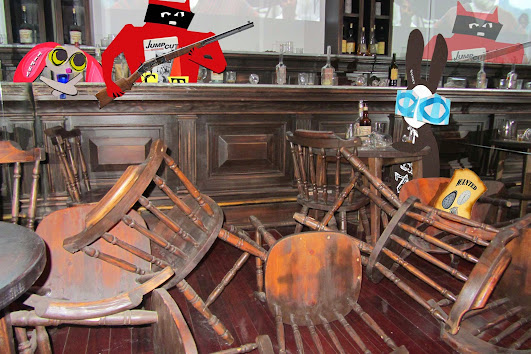 The Wabbit couldn't remember how he got there. One second he was watching the movie and the next he seemed to be in one. "Howdy stranger," said a familiar voice. It was Skratch, but the Wabbit had never seen him toting a Winchester. "You must be from the Badlands," said Skratch. "You'll be in need of a drink." "I'll have a carrot aperitivo," said the Wabbit - but when he saw Skratch's eyes rise a full one inch, he adopted a threatening snarl. "Put it in a dirty glass and leave the bottle!" A tinkle of glasses heralded a bodyless Tipsy who appeared from the back. The Wabbit turned and cast a deliberate gaze around the chaos. "I'm a lookin' for three flannel mouths," he drawled. Tipsy sipped her drink. "They wuz here and they wuz on the shoot," she nodded. "Broke the place up real bad." Skratch looked at his Winchester, dropped the lever and loaded new cartridges. "They spoke real fancy too," he grunted, "Said it was feeding time at the zoo." The Wabbit narrowed his eyes until they were slits. "Did they ask what time zone this was?" "They sure did," said Skratch, "and I told 'em 'Tango' like what it's always bin." Tipsy drained her glass and crashed it on the bar. "Round here, we don' go changing." "They sure gave you a bad time," agreed the Wabbit, "did they say where they wuz headin'?" Skratch pointed to the wall. "They said something about the mists of time. Then they vanished clean away." The Wabbit got up. "I'll head after them." "Hey Marshal," said Tipsy, "could you use a couple of deputies?"
at April 15, 2015