6. The Wabbit and the Late Late Movie 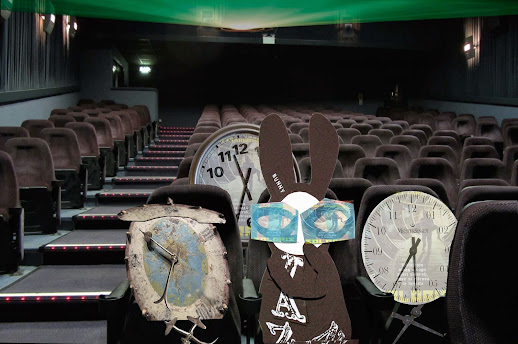 The Wabbit hopped straight into the auditorium, followed by the Time Zoners. The theatre was screening Tarkovsky's Solaris and it was just about to start. The Wabbit smiled broadly, but behind him bickering and confusion broke out concerning who would sit where. The Wabbit immediately moved to the front, but the Zoners followed and sat all around him. "Shhh" said the Wabbit. "Are we in time for the beginning?" said the Zoner to his right. "It's just begun," snapped the Wabbit. "Films should be dull at the start," said the Zoner, "so people have time to leave." The Zoner behind leaned forward. "Your ears are in the way." The Wabbit looked all around the empty cinema and shook his head sadly. Now the Zoner to his right chipped in. "A visit to the cinema is always about time travel." The Wabbit snorted. "Tarkovsky," he said, "does not represent time as a sequential flow of events." "Of course not," said the Zoner at the back. "Otherwise we wouldn't be here." The Wabbit kept his eyes firmly on the screen. "Where would you be?" he asked slyly. "Somewhere else," said the Zoner carefully. "Having a rare old time," added another and they all giggled. The Wabbit frowned and gestured silence with a paw across his mouth. "How long does this film last?" asked a Zoner. "A hundred and sixty nine minutes." replied the Wabbit from memory. "Oh that's splendid," said the Zoner at the back. "We have all the time in the world." The Wabbit smiled to himself. "Now where would you find all that time?"
at April 13, 2015