9. The Wabbit at the Tunnel's End 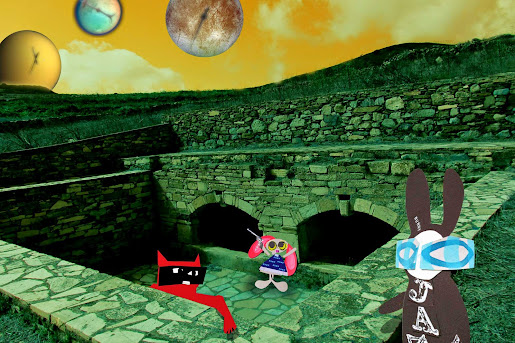 They emerged from the Time Tunnel and into a strange landscape. Three moons hung from a tangerine sky and there was absolute still. The Wabbit was the first to scramble onto the parapet and he turned to lend a paw to Skratch. "What's Tipsy doing and where did she get the Colt?" Skratch laughed. "She said she'd cover our rear." The Wabbit shrugged. "Skratch, where do you think this is?" "It looks like an old abandoned planet," said Skratch. The Wabbit heaved a sigh. "Nowhere's completely abandoned is it? Surely there's someone or something about." Skratch looked all around. "Desolation Row," he muttered. "It creeps me out." The Wabbit inspected the stonework. "Someone built this." "A team of Aztecs with time and attitude?" suggested Skratch. The sound of rapid revolver fire disturbed their musings. "What's Tipsy shooting at?" growled the Wabbit. They both looked up. The moons had moved position and now they were ticking in synchrony. "Well I know this isn't Pluto," said the Wabbit. "How do you know?" asked Skratch. The Wabbit smiled. "I was there once. It's on the Metro." Skratch knew better than to ask for an explanation of the Wabbit's wilder observations. Besides, the ticking grew louder and faster and the moons seemed to drop closer to the surface. "Let's take cover," said the Wabbit. "Tipsy! Check out the other tunnel!" Tipsy wheeled on one foot and fired three shots. But there was no echo. "We've got no choice," yelled the Wabbit. Tipsy peered into the tunnel but only darkness peered back. "That's tunnel vision," said the Wabbit.
at April 20, 2015