3. Tipsy, Stone and the Preview Tickets 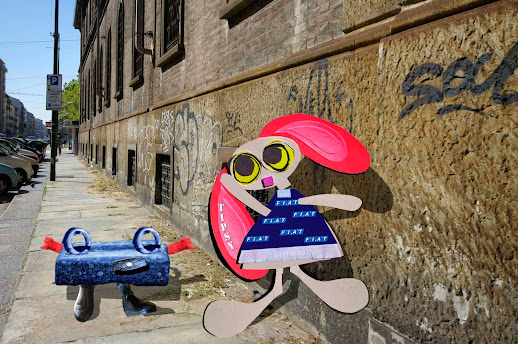 Not too far from the Gallery, Tipsy draped herself on a wall in a sultry manner only she could manage. It was unseasonably hot and Via Nizza baked in the afternoon sun. But Tipsy had a preview ticket for the Wabbit's Museum of Enemies and nothing else to do - so she looked up at the sun and figured it was time to go. "Och, bonny wee bunny!" Tipsy looked down to see Stone approaching so she pretended to know nothing about him. "Don't you bonnie wee bunny me," she retorted and slid down the wall a little. Stone's boots flew as he performed a series of dance steps called a Pas de Basque. "You're Tipsy, so ye are." Tipsy fixed Stone with a swoony gaze. "Would you like to take me out?" Stone tapped a beat with his boots. "Whit aboot the ballet?" " Tipsy shook her head, so Stone had a think. "I'll tak ye to the movies." Tipsy smiled and nodded. Stone's boots flailed as he danced faster. "Are ye going to the Preview?" Tipsy nodded again. "We'll gang thegither," said Stone. Suddenly Tipsy's ears quivered. "Whit was that?" asked Stone. Tipsy's ears pointed straight down Via Nizza towards the Gallery and she looked into the distance. "Stone, did you hear a muffled roar?" "Aye," said Stone, "a muffled roar means unco trouble." They both started to run. "Does the Wabbit knows we're coming?" shouted Stone. Tipsy laughed. "That's why he gave us tickets."
[Pas de Basque: elementary Highland dance step. Gang thegither (Scottish dialect): Accompany each other. Unco (Scottish dialect): extreme]
at January 19, 2015