7. Tipsy & the Question of Confidence 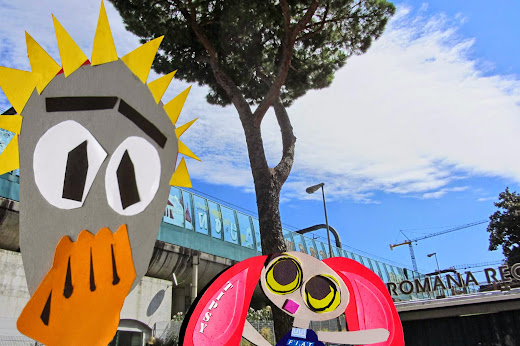 Tipsy found Panico by Roma St Peter's Railroad Station. There, it was his habit to watch trains pass over the bridge, a pastime which he found soothing. Panico was delighted to see Tipsy although it was hard to tell. His eyes blinked rapidly, his fist shook and his voice was tremulous. Tipsy looked up with swimmy eyes. "Panico, fancy meeting you here!" Panico's heart fluttered. "Are you visiting?" Tipsy laughed. "No, I came to ask for your help." Panico was about to say "who me?" but instead he drew himself up to his fullest height. "I'm at your service!" "The Wabbit asked for you specially," said Tipsy, "He's having difficulty with an enemy." Panico drew a breath and started back. "How big is it?" Tipsy threw her paws wide. "It's a giant ball." Panico shuddered inside but he spoke boldly. "Giant balls hold no particular terror for me." Tipsy gaped. Panico nodded vigorously. "I can deal with giant balls." Tipsy smiled inwardly for she knew this bravado was more for Panico's self esteem than for the task in paw. "How do we get there?" asked Panico suddenly. "The truck," said Tipsy. "It's a very long way," groaned Panico, "so who's driving us?" "Me," said Tipsy. Panico's eyes bulged in terror. "Aaaaagh! Fabulous!" he yelled. He listened to his voice bouncing round the railroad arches until it faded entirely. Tipsy fluttered her eyes. "Panico darling, do you want to drive ..?"
at January 28, 2015