1. The Wabbit & a Technical Departure 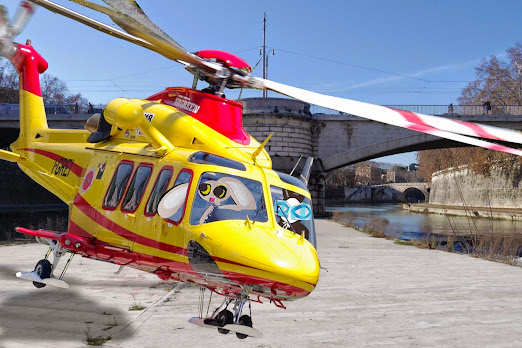 The Wabbit and Lapinette were the last to leave for home. Lapinette took the opportunity to collect her helichopper from maintenance then she picked up the Wabbit from Isola Tiberina. "Did you throw some juice in the bird?" grinned the Wabbit. "Yes," said Lapinette. "Light the fires and kick the tyres?" "Yes," groaned Lapinette. "Any issues?" asked the Wabbit. Lapinette turned quickly. "Loose nut behind the cyclic." The Wabbit winced. He thought it was about his loop the loop adjustment to the pitch control, but he quickly realised Lapinette was referring to him. So the Wabbit relaxed and settled back. Lapinette made a vertical take off to hover then checked. "Pitch, attitude and position," murmured the Wabbit. Lapinette pretended not to hear. Then with a burst of throttle she wheeled and darted into the northern sky. They fell quiet except for the sound of the blades and the chattering of the Wabbit's teeth. "Any ideas?" said Lapinette. The Wabbit shook his head and Lapinette smiled. "I had a message from the Department." The Wabbit brightened. "Your Museum of Enemies is ready." "I had quite forgotten," said the Wabbit. "They want you there for the opening," said Lapinette, "and you have to make a speech." The Wabbit fished in his fur for a set of felt tip pens and a notepad. Then he grimaced. "What's up?" asked Lapinette. "The first hundred pages are the hardest," blinked the Wabbit.
at January 14, 2015