15. Tipsy and the Face of Darkness 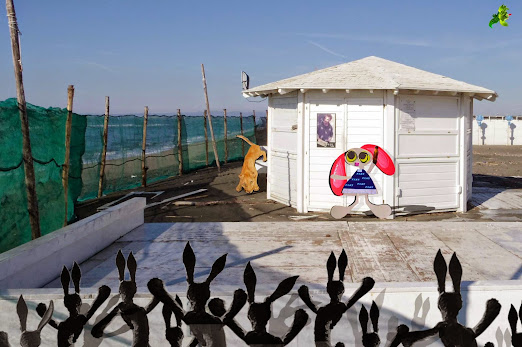 Tipsy was the decoy and she was anxious to get this right. So she leaned against the beach hut in a sultry fashion and just as the Agents loomed into sight she raised her eyes and stretched out an arm. A yellow vial came tumbling from the sky and slapped into her paw as if it was a baseball catch. The Agents' snickering clicked off like a sitcom laughtrack. Tipsy let her eyes swim in and out of focus. "Oooh," she mouthed. "My names Tipthy."  "Give us the vial!" shouted the Agents. "Give us it now!" Tipsy threw the vial in the air and caught it.  "Finders keepers, so you need to make it worth my while." "A bottle of champagne," said one Agent. Tipsy snorted. "What sort of rabbit do you think I am? I don't come cheap you know." The Agents rattled their paws threateningly. "Just hand it over!" shrieked the leader, "or we'll take it by force." "Don't you oppress me," said Tipsy. "Besides, you haven't met my little sweetheart kitty cat." A shape moved behind the beach hut and Puma padded into sight. "Meaow," he growled. The Agents drew back, grumbling about sorcery and complaining of magic. "I wonder what's in the vial?" simpered Tipsy. She looked up at the sky again and started to unscrew the bottle. "It's late. I feel like an itsy bitsy drinky poo." "No!" yelled the Agents. Tipsy suddenly threw the vial in the air and batted it directly. The contents showered over the Agents. For an instant nothing happened, but it was just enough time for Tipsy and Puma to wave. "Be seeing you ..."
at January 07, 2015