14. The Wabbit and the Big Wait 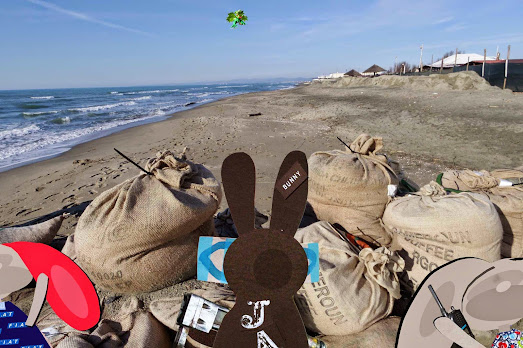 The beating of dragon wings could hardly be heard over the swell of the waves, but it was there. "Here he comes," said the Wabbit. They watched as Terni got closer. "Is everything in place?" asked Lapinette, although she knew that it was. "Boom," muttered Tipsy under her breath. The Wabbit stared down the beach to locate Panico and the coast team but suddenly pricked up his ears. "I can hear them." The Agents of Rabit had a very particular sound when they were stressed. It was between grinding metal and a badly played violin and it set Lapinette's teeth on edge. "So can I," she said, and lifted her walkie talkie. Skratch's voice spoke through the crackle. "I hear them but I can't see them yet." Terni started a slow descent, circling over the beach huts further down the shore. Now the beating of his wings swept along the seafront, whipping grains of sand into a series of tiny storms. Tipsy strained to hear the Agents and she could - but all the sounds were so loud that she had to shout. "They're afraid." The Wabbit kept his eyes fixed on the distant huts and growled. "Major Spitlove did his job." Lapinette kicked the sandbags. "They must want Panico's vial very much indeed." The Wabbit visualised the Agents as ten times their normal size and shuddered. Lapinette spoke into the radio in an impatient tone. "Are you all ready?" The radio crackled. "We're ready, are you ready?" "Ready as anyone can be," hissed Tipsy.
at January 05, 2015