5. The Wabbit and the Offshore Unit 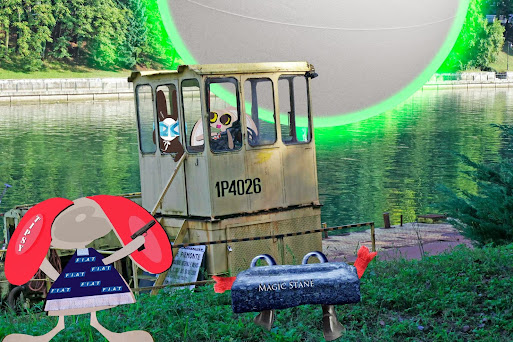 The Wabbit and Lapinette ditched their jeep and ran along the riverbank with the Ball in close pursuit. The Wabbit seemed to have a clue about the Ball but his plan came to a halt when he decided to hop onto a maintenance barge. The Ball made heavy weather of the water as had been expected and its muffled roar turned into a waterlogged creaking, but it drew close enough and started to pulse. Lapinette shook a control unit. "This ship will never sail." "It's not a ship as such," retorted the Wabbit, rattling the door handle. "It's a Mobile Offshore Unit." By this time, the Wabbit knew he had made two erroneous assumptions: the first was that he could start the unit and the second that he could sail it. He was just about to move to Plan B, when he heard familiar voices. "Commander! Marchesa!" Tipsy pulled out the automatic she'd borrowed from the Wabbit's secret dump and fired a warning shot at the Ball. But the recoil spring jammed and Tipsy hurled a stream of invective that curled the Wabbit's fur. Now the Ball was stationary but its green glow pulsed steadily. Lapinette stared at it and nudged the Wabbit. "Who's inside the Ball?" The Wabbit thought of a list of enemies then shook his head. "Anyone's guess." Lapinette took over. "Tipsy," she yelled. "Take the truck and get Panico." It was the Wabbit's turn to stare. Lapinette shrugged. "Panico's the biggest friend we have." The Wabbit looked sceptical. "But he's terrified of Tipsy." "We all are," smiled Lapinette.
at January 23, 2015