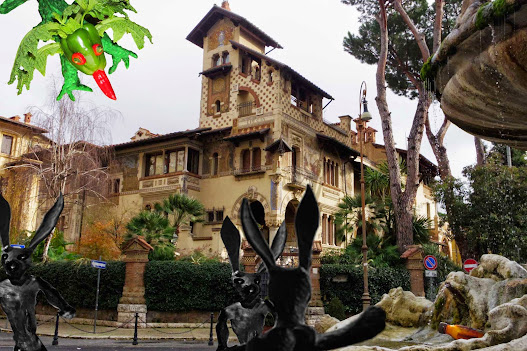 Not far from the island, Spitlove, the Wabbit's double agent, hid the yellow vial and arranged that the Agents of Rabit find it. Spitlove was a rather inventive operative - and that was why the Wabbit kept him on his books. Spitlove had suggested that a team of Agents search an area they knew little about and appealed to their superstitious nature by suggesting it was a place of sorcery. The Agents were on edge. Spitlove led them past a fountain, but said nothing as they cast back and forth. "There it is," shouted an Agent stretching out a paw, "There's Panico's vial!" But the moment he touched it, the fountain creaked into life. Agents shrank back as tiny droplets of water showered over the vial. "What magic is this?" said one. "Don't let the water touch you," said Spitlove. "We might be turned into frogs." One Agent, rather brighter than the rest, spoke up. "Perhaps we can turn it off." They searched for a switch or a lever - anything that would stop the fountain. But with another creak as sudden as the first, the fountain shut down. Small waves moved the vial slightly and tiny beads of water glistened on the glass. "You take it," said one Agent to another. "You first," said the other. Silence fell and for some time the air was still. This didn't last long. "I heard an odd beating sound," said the first Agent. They looked up as a green shape loomed larger and larger. "A dragon!" yelled the Agents. Terni the Dragon swooped down and, in an instant, gathered up the vial then swooped into the distance. "Follow that Dragon!" yelled Spitlove."
at January 02, 2015