2. The Wabbit and the Surprise Exhibit 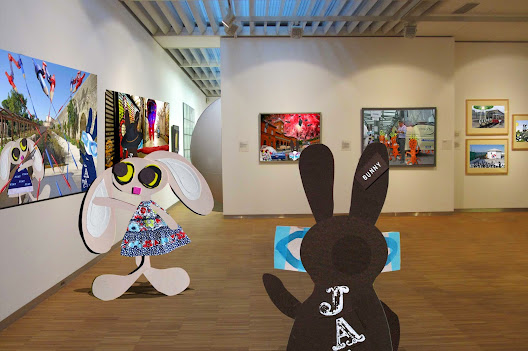 Lapinette and the Wabbit strolled around the exhibition preview. They smiled as they hopped from room to room and pointed and laughed as they relived old adventures. "It's going to be a big success," said Lapinette. "Think it will make La Stampa?" murmured the Wabbit. "We do get the odd mention," said Lapinette. The Wabbit scowled. "Every twenty years?" Lapinette smiled because she knew the Wabbit didn't really like publicity. "Oh look," she gasped, "the Euclidean Faction!" "We frustrated its turn to armed geometry," grinned the Wabbit. "What happened to them?" asked Lapinette. "Nothing much," said the Wabbit. "They had no moral compass." Lapinette moved close and lost herself in the image. "Lapinette," said the Wabbit softly. "Mmmm," said Lapinette. The Wabbit narrowed his eyes and looked into the next room. "I saw something move." Lapinette hopped back as a shadow passed across the picture. "Just a trick of the light." The Wabbit frowned. "Art gallery lights don't play tricks." Lapinette shook her head. "Maybe it was an installation." The Wabbit's ears twitched. "There it is again." Lapinette looked round. "I can't see anything." The Wabbit beckoned and Lapinette joined him. "There!" Lapinette gulped. "It's ... " "Rover!" yelled the Wabbit as he delved in his fur. There was a terrifying sound as a giant ball slithered into view and spoke. "Wabbit, you have pretensions - but you're just a number." The Wabbit thrust Lapinette behind him, pointed an automatic and growled. "Where's your invite?"
at January 16, 2015